Just yesterday I finished writing an article about several ways in which the Trump agenda is directly having adverse effects on my work as a modern academic. But before that one even hits the press, an emergent situation - on a totally different front - has emerged in our small upstate town. Welcome to the USA in 2017 ...

I’m now feeling obligated to let the world know so as to potentially help with this egregious situation. Be ready to be absolutely outraged.

Joel Guerroro is a resident of my small town of New Paltz. He immigrated here legally from the Dominican Republic. His family moved here when he was a teenager. They came here for the same reason that my ancestors came here about 100 years ago. To have a better life. To pursue the American Dream. This is the United States of America and, to my mind, this is the entire point of the constitution of our great nation. 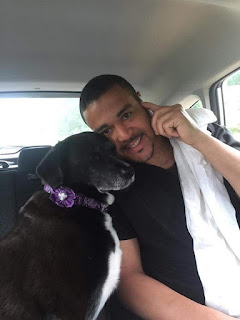 Joel works in the field of construction and is married to long-standing resident of New Paltz, Jessica Guerrero. She grew up in New Paltz. She graduated from the same high school that my daughter goes to right now. She took classes at SUNY New Paltz, where I teach. She and I have 10 common Facebook friends. This is New Paltz - this is small-town America. And this is a town full of people living the American Dream. Without knowing Jessica well, I will say this in case it is not obvious: I stand for her and her family and their right to pursue the American Dream.

Jessica is now pregnant with Joel’s baby. They are excited to build a family here in New Paltz. And just hearing their story makes me excited for them.

So you can imagine how up in arms people in my little town are to hear that Joel is now behind bars in a federal immigration detention facility in New Jersey. He was arrested after a routine semi-annual meeting with ICE officials last week. It was a surprise arrest.

He was not given the option to have an attorney represent him. He is currently behind bars  - with the rationale being that he (a) missed one meeting with immigration officials seven years ago and (b) he had some misdemeanor arrest regarding marijuana possession when he was in his 20s.

Joel Guerrero is married to a native of the USA - she is pregnant with their child. He immigrated here legally many years ago with his family - in an effort to pursue the American dream. And he is behind bars as I type right now. (Details on his story are presented in the New York Daily News here).

I have one question for the new administration of our nation regarding this situation, and it is this: ARE YOU OUT OF YOUR MIND!?!?!?

When my wife and I moved to New Paltz, New York (USA) in 2000, our plan was to build roots and work toward the American Dream in this wonderful little upstate town. No doubt that the Guerreros have the same plan in mind.

This is still the United States of America, and I am here to tell you that if you are outraged at this insanity (and I hope you are), you have options. Please write to your representatives in Washington, DC. Write to New York State officials. Call Congressman John Faso's office (845-514-2322) and express your outrage. Write to your local newspapers. Use your first amendment rights to the fullest. And express your concern.This is the United States of America, and we have freedom of speech and freedom of the press. As we all work through this difficult time in our history, do not ever for one second forget the guarantees of the First Amendment.

Let the world know that you are a patriot - that you stand for the values of the United States of America. And that you will not tolerate this act of Anti-Americanism for one second.

I stand with the Guerrero family - and with thousands of families around the nation who are dealing with similar instances during this dark time in US history. Let's follow Senator Elizabeth Warren's lead. We, the defenders of the values of the United States, must persist.